This is the website for sports and clubs based at Karaka Community Event Centre and Karaka Sports Park. 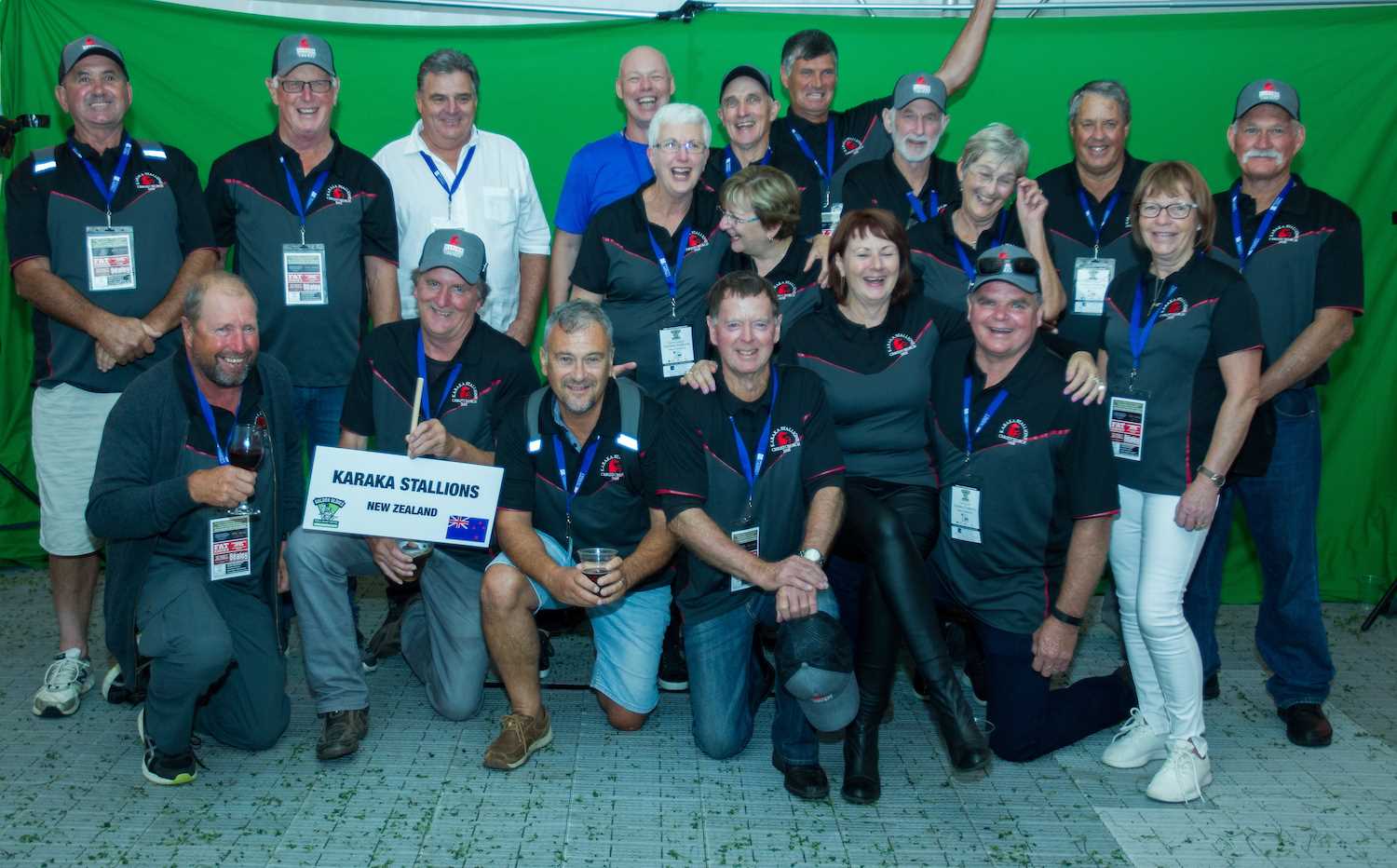 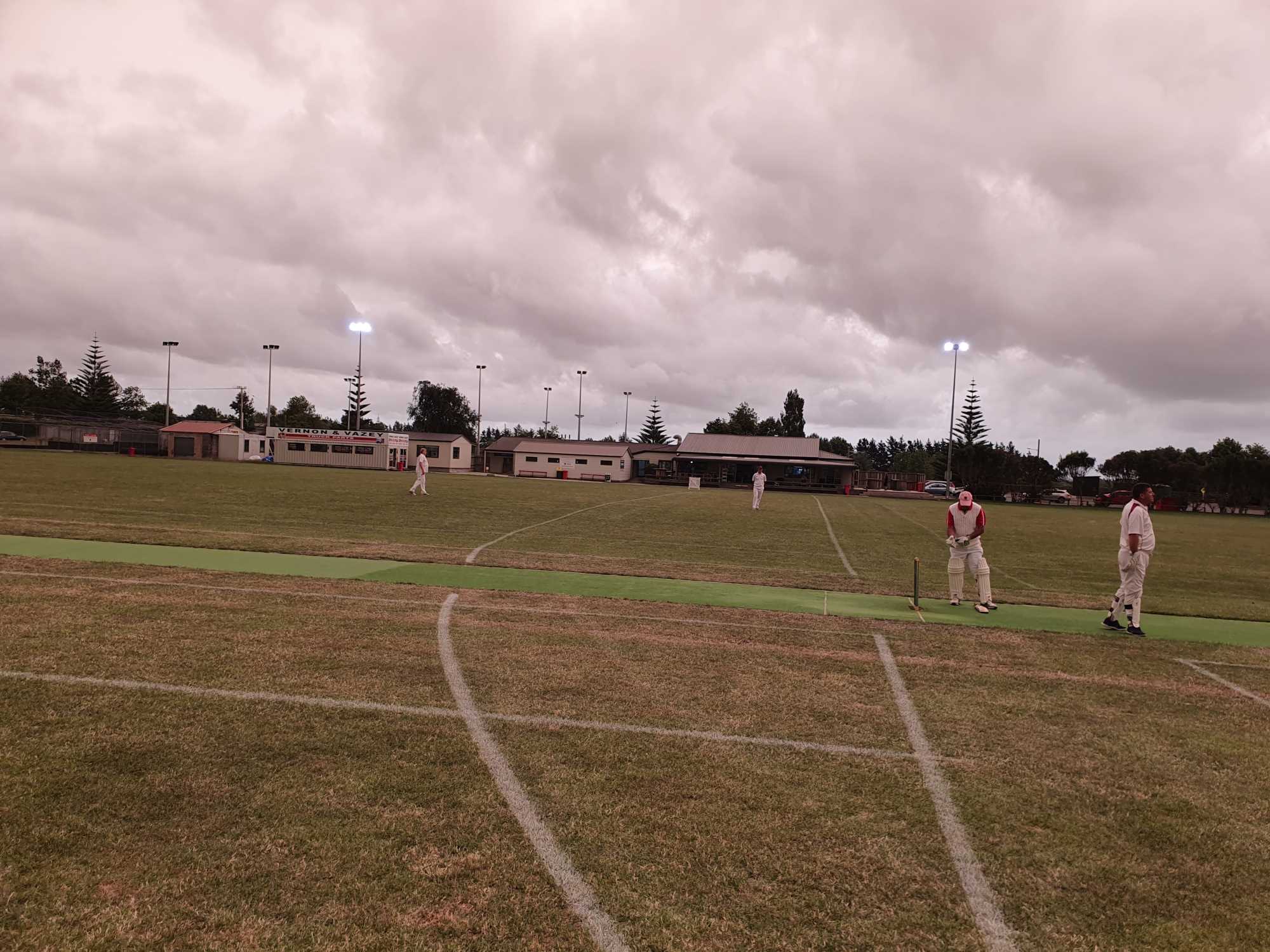 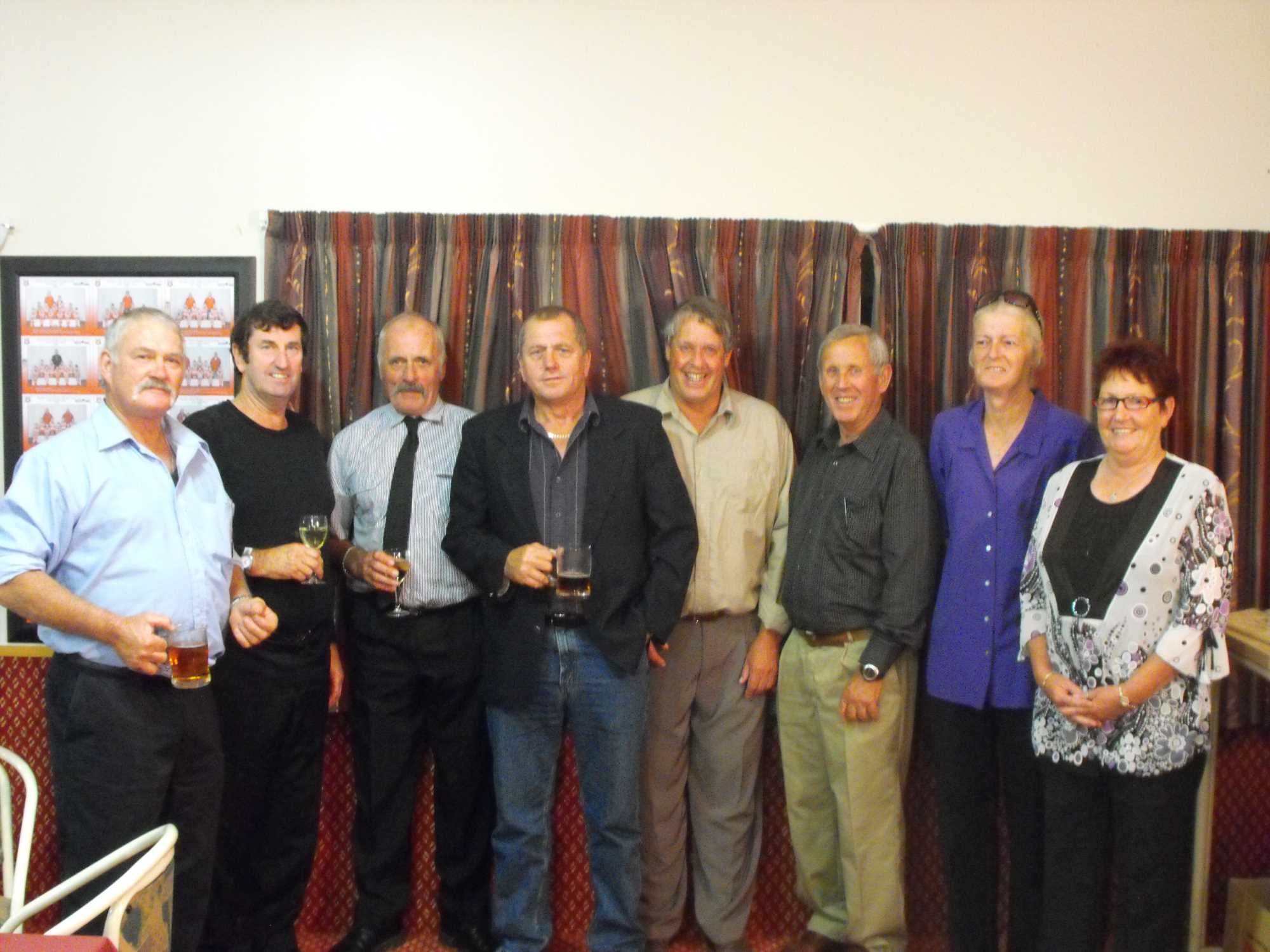 A lovely Sunday morning, Mark Harvey had arrived early and set everything up so everyone was enjoying a relaxing cuppa as todays captain walked into the clubrooms (on time for once).
As game time approached the toss was had, the Stumpers won the toss and put us into bat.
With the Fozzie bear running late, Baha stepped up to open the batting, unfortunately 4 balls later he was back in the hut for no score, one down for no score at the end of the 1st over, and it seemed to be getting even worse as Neeraj edged the 2nd ball he faced to the keeper who generously dropped the catch.
From that point on the Stallions took over, slowly at first but when Neeraj smashed a 6 the score took off, this spurring him on to his 30 and a well earned rest from the heat, then John got to 30 and joined him in the shade.
Rob joined in with a quick fire 14 that kept the score board rolling. Now we had Liam and Kane at the crease, Kane looked at ease while Liam struggled early before drinks.
At the half way mark, the Mighty Stallions looked in fine fettle, with only 2 down for 106 and 2 retirees and 2 more looking most likely to get there as well.
The break seemed to be what Liam needed and he raced thru to his 30, bringing Shane to the crease for his first game of the year, and thus, his first action was to give an admirable impression of Henry (whom he had replaced) with a "Yes/No" call leaving Kane cut off at the knees and Run Out for 21. With guilt written across his face, Shane set about making up for his misconduct. He was joined by Daniel who surpassed his brother's score then holed out attacking the boundary. Gary came out to join Shane, who did his best to run out Gary as well, but instead the boys beat the ball 3 times to run a 4. And as they kept running, the score mounting quickly, but just as he was getting into his work Gary popped up a catch, which was finally caught by the opposition.
The Runs kept piling on as todays Captain helped Shane through to his 30, thus erasing his earlier faux pas. This bought the number 10 and 11 batsmen together, who hit out for quick runs ultimately sacrificing their wickets for the greater good of the team and bringing the retirees back in, who piled on the runs in the final few overs. Stallions bowled out on the final ball for a mighty 220.
Notables, Shane 39, Liam 37*, Neeraj 31, John 30.

After a refreshing lunch put on by the Prez (thanks Mark) the stallions trotted out with confidence abound.

John and Kane opened the bowling, a good line and length making it almost impossible for the openers to score. Unfortunately the batsmen managed to keep their wickets until the first change.
This bought on Liam and Craig who also hit a good line and length suppressing the run chase, while the runs were not coming, neither were the wickets and it wasn't until the 12th over we made the breakthrough, when a catch was offered up to Kane off Liam's bowling. Their number 3 batsman was run out without facing a ball, but the Stumpers steadied and plodded on to drinks.
At Drinks the Stumper's had amassed a paltry 61 runs for 2 wickets.
With drinks over, Richard and Baha took the ball. After each bowler had a rusty over the captain struck, with 2 wicket maidens and a 3rd wicket in his 4th over, but while Richard's luck was in, Baha couldn't buy a wicket, he just bowled to well and the opposition just wasn't good enough to get out.
Needing some overs from the part timers, Gary, Daniel and Rob, rolled their arms over. While he couldn't get a wicket with his bowling Baha was the pick of the fielders, running tirelessly and throwing himself about in the field and snaring a very sharp catch off Gary's bowling. Where Baha had no success bowling, Daniel once again surpassed his brother quickly taking 2 wickets with his aimless pies, and ending the Stumpers misery.
Notables, Richard 3 -12, Daniel 2 - 5, Gary 1 - 7, Liam 1 - 13.

Man of the Match went to Liam who had a fantastic day with bat and ball, finishing the day behind the stumps, an all round superman.
He also won the Hardest Man (head) of the day as well, when on the penultimate ball of the innings he was struck in the head from a top edge while keeping.
While a fantastic clunk was heard as the ball ballooned off his eye brow, it was nice to see the genuine concern from all, as highlighted by Kane's enquiry "is there any blood?"
Like the hardest of the hard our man rose from the dirt to take his place behind the stumps once again, only for the same edge to be hit from the very next delivery, this time to his credit Liam took the catch (instead of heading it again) to end the innings.

All in all a great team win for the Stallions, it was a game where every player played a part and as captain for the day I had nothing to do but sit back and watch.
Thanks Lads. Rich.

Judging by the whattsapp traffic the results of the Stallions/ Rogues match held today has been closely followed.

Therefore I thought I had better squeeze the report out.

Firstly congratulations to Henry and Lolly for rustling up a pretty capable team at short notice, after the call went out Friday at 4:10pm, the squad was filled at 7pm. A couple of handy new Stallions Grant Beare  and Steve Wallace, and 12th man Wayne was a bonus given a few broken parts in some of the lads.

It was a very hot day, and the pitch initially was unmowed and unrolled when we arrived so looked like a batters bad dream. The Rosetown boys got the paint, mower and roller out  and pretty soon we had a decent deck to use.

We managed to win the toss so elected to bowl first as the pitch was looking great for the ball.

Openers Andrew Cassin (1-7 off 4) and Grant (1-5 off 5)set about their work looking every bit like their 25 year old former selves. Very tight bowling for the first 8 overs saw the Rogues with only 10 runs on the board and two key wickets bagged. Andrew pulled up lame and no sympathy from his bro who refused to administer physiotherapy on Andrews groin strain, so time for a bowler change.

Daniel gave us a masterclass of variable pitch bowling picking up 3 wickets for 16 off his 6 overs, earning him the man of the match and by drinks we had the Rogues on the back foot at 64/6.

After drinks Daniel,  Liam (0-3 off 6),  Steve Wallace (0-16 off 6) and Henry (2-7 off 4) finished off the job, Henry very keen to get his bucket list sorted by talking up a hattrick after getting his first wicket. Highly confident, but skills didn’t match.

At the end of the 40 overs we had the Rogues at 102/9 and a win was in the wind (or lack of as it was very hot – almost 30 degrees.) Awesome bowling effort and not bad fielding, we took some good catches, Baha got a direct hit runout so a great day in the field.

After an excellent lunch (homemade seafood chowder!) we donned our pads and went out to the pitch.

My fellow opener Liam offered me the strike and we set about the chase. The pressure was off so by 10 overs we were 31 without loss so feeling confident. If only it wasn’t so hot! Both Liam and I managed to get our 30’s despite a couple of close calls where we were lucky.

Stallions 104 without loss and a win on the way to Seddon Park.

After match was a good time with a few beers and great company the Rogues, a good bunch of guys.

Because we finished so early, the Rogues bid us farewell and the team started a victory pub crawl home and fining session (excluding the Skip and Steve, as we had to get home).  Last update at time of writing this the van was still in Whatawahta at the 3rd pub home!

My thanks to fellow Stallions for a very enjoyable day, making captaincy easy today, and Rogues for giving us a great outing. Fozzie

Gentlemen this is your captain speaking.

Buckle your seat belts and lets get on with the match report.

Henry made a somewhat rash decision midweek seeing as the game counted for nothing towards the points table and appointed the young brash maverick Shane Blair as captain, deep down hoping he would trip over his fat mouth and lose!

The boys got out to Waikaraka Park early and raring to bat first with a strong batting lineup. However Onehunga turned up running scared with only 5 players which meant bowling first was our only option.

It was then decided we had to also lend them 2 of our players plus Baha's son to make it a 9 a side affair and a 35 over battle.

Luckily for the Stallions Captain Shane bought his own deck of cards and shuffled them nicely to ensure the Cassin brothers (cassinovers) played for the opposition.

So we had an even stronger side with 9.

Kane and Baha started with a bit of movement in the air with Baha unfortunately only getting 1 ball at his son (which was a pie down legside).

Then the wickets crumbled when Craig Grey settled on his usual nagging line and length. Having them 3 down for 20. The Cassins both came in looking for quick runs and big shots after also talking big things. However both went to sharp catches and all of a sudden Onehunga was 5 for 50. Their 2 tailenders came in and hung around to eek out a total of 110/7.

Neeraj and Fozzie opened looking to get it done before the Americas Cup started. However Fozzie mistimed his usual bread and butter pull shot and was out for 4.

Suddenly the Cassins found their lungs again and Henry was quickly brought into the attack. He then proceeded to bowl 4 overs of absolute Licorice Allsorts including 3 beamers at new captain Shane to deliberately send a message. He finished with 0-40 off 4 which could cost him a bowling spot in the next few games. Shane and Neeraj then took toll of what was a rabble of an outfit and quickly retired. Then Liam and Kane finished the job to notch a win by 7 wickets.

A good feed and a few beers and laughs ended an enjoyable but mismatched day of cricket. Until next boys

For sport players registration please contact the relevant sporting code, information on their page above

For advertising and Community Notices for the Karaka Kronicle only, please contact